With technology growing and improving every day, it’s no surprise that more and more couples are starting to request drone photography at their wedding. Originally invented to be used to scope out dangerous war zones, drone photography is now often used for ariel photos of real estate, large events, and now… weddings.

The reason so many couples are becoming interested in drone photography is because you can’t beat the shots the drone is able to take from an angle no photographer has ever been able to reach before. 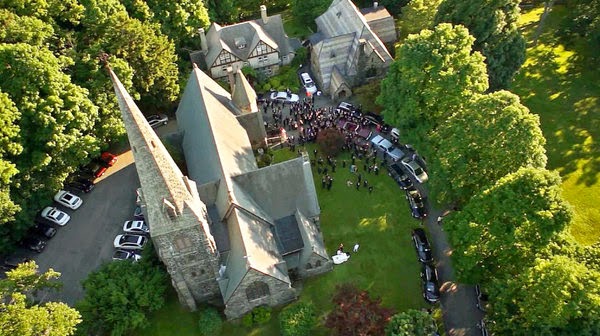 http://www.nytimes.com/2014/08/03/fashion/weddings/bird-plane-no-its-the-wedding-photographer.html
Some of the critics of drone photography at weddings say that the devices are actually quite noisy. Because of the noise, guests are often distracted by the sound of the device, causing them to draw their eyes upward at the camera, making for an awkward shot. Not to mention that it takes their focus away from the ceremony. Wedding photographers against drone photography point out that one of the things that they get complimented the most about is that the client never even noticed the photographer was there. With drone photography, there is no discreteness – it’s there, and everyone knows it. 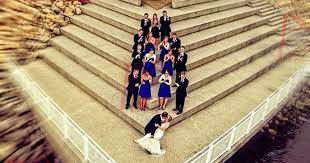 http://www.brides.com/blogs/aisle-say/2014/07/wedding-drone-videography-trend.html
There are also other concerns when it comes to ariel drone photography, one being the lack of clarity on the laws about drone photography, as this technology has not yet been sanctioned by the F.A.A. Even worse, there is always the chance of a failure on the device or a mistake made by the person controlling it, causing the drone to come crashing down. Seen in this YouTube Video, the operator of the drone lost control, sending the drone flying into the groom’s head, causing a scratch and a bruise.
So how are people feeling about this new technology? The Pew Research Center released the results of a survey on “U.S. Views of Technology and the Future.” It indicates that the American public remains highly skeptical on the use of drones inside the United States. Only 22% said that this would be a good thing, while 63% said that the domestic drones would be a negative.
The trend has yet to take off in Austin, as we only found one company that currently offers drone photography. For more information about having drone photogphray at your event, contact Austin Drone Photography.
Tell us how you feel about drone photography. Is this something you would consider having at your wedding? Why or why not? Guests, how would you feel about having a drone fly overhead at an event you were attending? And lastly, we would love to hear how local photographers are embracing or turning down the new technology.